No third-party cookies? No problem. TripleLift has acquired 1plusX and our award winning first-party data activation platform.
Together, we'll help customers address audiences with the privacy-friendly solutions our industry has been seeking. 🚀 Read more >

Chat on the future of Programmatic with our CBO René Plug, Christopher Reher (Axel Springer) and James O’Brien (Digiday) ???? 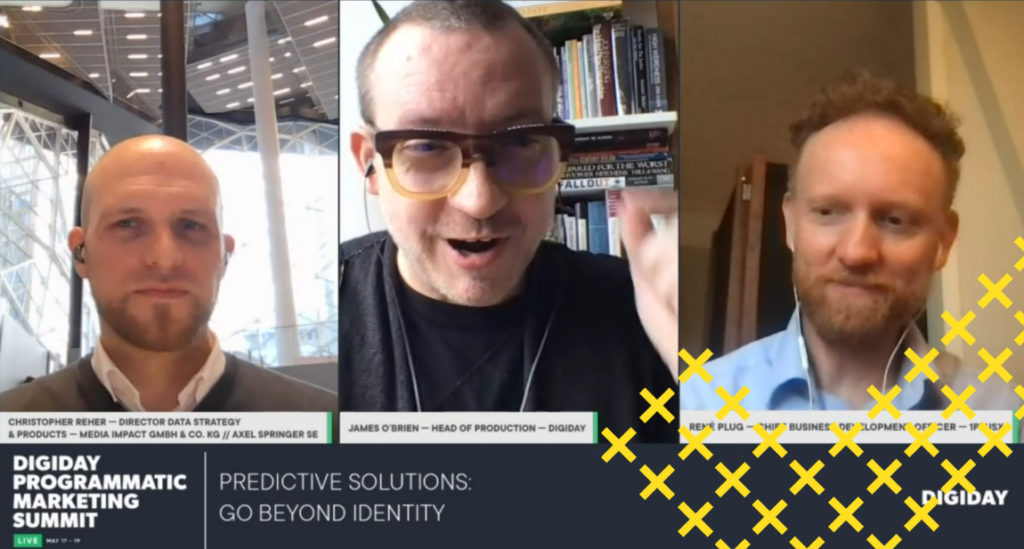 A fireside chat about the future of Programmatic with our CBO René Plug, Christopher Reher (Axel Springer), and James O’Brien (Digiday).

Last week we had an interesting fireside chat with Christopher Reher (Axel Springer) and James O’Brien (Digiday) at the Digiday Programmatic Marketing Summit, where we discussed the most important questions you need to be asking your teams when it comes to a future beyond identity.

Watch the recording of the session here:

One solution won’t be enough to fill the gap left by ATT (App Tracking Transparency on iOS) and the demise of the third-party cookie. Not only will you need an addressability solution that operates with or without matched User IDs, but that also optimizes the use of IDs vs. Contextual and Cohorts in real-time. Adaptive tracking, including dynamic allocation of targetable audiences and comprehensive addressability management, will be the new normal to stay competitive.

James O’Brien:
Identity is the topic of the time; we’re immersed in thinking about it and working with our partners on it, but it’s also one of those topics that get abstract very quickly because we’re still working on it; there’s no solution kit. There’s something to be built here and I know that you guys are thinking about this intensely. René, we’ll start with you. How would you describe from your position at 1plusX the overall solution to the identity challenge? Where are we going?

René Plug:
I think when they think about identity solutions, a lot of publishers, advertisers and agencies think about recreating the old third-party cookie system in the new world. There was, of course, a beautiful third-party identifier system, and whenever we talk about identity, we’re trying to recreate this old status quo via first-party cookies and via new methods. In a way that is very understandable, certainly in a market that is very dependent on Open RTB type of budgets, you immediately think about creating a match between identities and trying to recreate the identity match that we used to have.

But we’ve seen first results that the matching rates are going to be very low and it’s just not going to be enough. That’s going to create massive challenges for both publishers and advertisers. On top of that, we see that the trends are moving away from identity per se. If you look at the large platforms like Google and Apple, they’re moving away from these commonly shared identities and moving more towards an identity that is actually private to a particular publisher space.

On top of that, they’re also moving to cohorts and other concepts. There’s definitely a very clear focus not on shared networks of identity, but on private publisher identities. At 1plusX, we clearly see that this trend is not just for Google and Apple, this is a trend that also extends to premium publishers. Large publishers, definitely in Europe but also in the US, are increasingly thinking about how to create their own first-party-based identity solutions that they can actually transact on.

They’re asking: How do I make myself less dependent on all these third parties and all these networks out there, and can I actually do the same thing as Google does on my own inventory. And I think the answer is very clearly yes. So when you ask me about what the identity solutions of today are, I have to say it’s a more diverse mix. Yes, there’ll be identity networks. Yes, there’ll be first-party cookies, but there’ll also be private networks, private identity solutions of publishers.

James O’Brien:
We wanted to break out an example of a team that is achieving anything close to what we’re talking about here with these diverse and moving parts. René, when you look at Media Impact Axel Springer, set up what you’ve seen, and then Christopher will take us into what they’re up to.

Christopher Reher:
What you just said is absolutely true. The landscape we’re operating in is massively changing because of the different aspects: obviously, the chaos of third-party cookies, the regulatory part, especially in Europe, which is very strict. Users are looking into the way publishers are working with data. And what we’ve done here is to move away from the main platforms, to build our own data stack with strong partners, 1plusX for example, to make sure that we are as independent as possible and also to be able to cope with the movements of the landscape of business.

That means that the reach we once had in terms of third-party cookie matching will no longer be there. We see this not as a disadvantage, but as an advantage because we can suddenly have a direct relationship. We’ve gained back control where users interact with us. We can make sure that all the necessary steps are taken, that data privacy is taken care of, and we can directly interact with all the partners. And have a better experience for all involved in this point.

There’s also a push for a free market situation where you want to have strong relationships with publishers and with tech providers in a transparent way. I think that is the most crucial part that we see today: that this whole data usage topic is being displayed very clearly and finally being discussed. I think in that point especially, publishers with strong partners can drive this situation.

James O’Brien:
I hear you talking about independence and the free market model and also about reach and the inherent challenges that come with taking these steps that you’re taking. What’ve been the critical steps for your team in the direction of independence and reach?

Christopher Reher:
I think you should differentiate between the different sides. There’s always a discussion between advertisers and publishers. When you’re on the publishing side, you have to be sure that you get into the nitty-gritty, that you accept the investors’ stakes, that you build up dedicated teams that are cross-functional and that have decision-makers in them, that you’re willing to build up technology, understanding what you can’t do and how to get the best out of it and make sure that you have a coherent structure and first-party strategy in place.

Without a coherent first-party data strategy, I assume in the next year you’ll be worse off once third-party identifiers go away. These would be two crucial points to take away: be sure to make the investment in a coherent first-party strategy and be willing to dismantle it once regulatory change hits you again because this can happen at any time. An important point for publishers is that you’ve to build products and you’ve to build a relationship with the users you’ve because the trust of your users is the big capital you’ll have in the future. And from the advertiser side, the biggest step is to realize that this is affecting you. Make sure that you invest the time, that you invest in the technology, and that you don’t shy away from the discussion.

James O’Brien:
I hear an overarching theme of flexibility and dynamism, being able to both take a stand and put an investment into some direction, but then also know that you have to bring along that audience, you’ve to build those partnerships, you’ve to keep those publisher partners tight and change with the times. Let’s talk about that change for a second and look forward. When we think about predictions, what’d you think the industry will achieve over the next 12 to 24 months in terms of identity solutions?

René Plug:
I think the industry is very resilient. We’re going to get to new solutions, I think that’s very clear. But I do think that people should look beyond identity because if you only look at identity and try to match one-to-one to all these different relationships, you’re going to have too low net rates. So the industry needs to look into these new technologies. I’m expecting that a lot of publishers and advertisers will adopt new technologies and new ways of transacting with their partners.

There’ll be predictive – it’s definitely a very promising technology, and there’ll be deeper relationships between publishers and advertisers. I see too much Open RTB; too many transactions are made outside of a relationship between advertiser and publisher. Publishers have a lot to offer. Advertisers have a lot to offer. I think the new situation is forcing us to work together more, and that is a good thing.

I’m expecting more conversation between agencies, advertisers, and publishers; I’m expecting cool data deals, cool products, and really cool innovation. This is how we can actually get something better out of this situation than what we had in the beginning.

Christopher Reher:
I think in the end it comes down to building all of these trust moments that we’ve talked about. For the publishers it will be creating real value, making sure that people understand that it’s useful for them to provide data, and making sure that it is being used in a good way. On the other side, making sure that this dialog between advertisers and agencies that we just mentioned is maintained: that all parties are involved, work on standards for the markets, and apply alliance models.

Then the question around identity actually fades into the background. As soon as you are transparent and the solutions that you bring are concise and understandable for users, then you just have to make sure that you provide the signals you get. We see things like TCF and standards being created to make sure that signals are provided, that the user can voice their opinions.

As René said, the market is resilient. Now it’s a time of dialog and making sure that we get to a point where we can actually work with the signals we have. Will there be payment models? Definitely. Will there be additional identity solutions? Sure. Will there be publisher I.D.s, for example? Naturally. But I think in the end it will be a mixture of what works and also what is being perceived as a good aspect of business and also of user experience.

James O’Brien:
This has been an optimistic look. You brought us a picture of identity that’s about collaboration and cooperation and cohesion, and I think that that’s very much what the industry is looking to hear right now, so I’m glad that we’re able to put a lens on it in that way. Next time we’ll find out if what we thought today came to pass and how far along the identities solution path we got.

Two Heads Are Better Than One: TripleLift Acquires 1plusX

Unlock the Value of Your First-Party Data at DMEXCO

Contextual vs. Behavioral Targeting: Building Trust and Revenue in a (Third-Party) Cookieless World People-Based Marketing: The Final Frontier
Advertising has changed a lot since its first invention. Before the 1930s, ads were all about the product. Then, you...
Read More Data-Rich, Insight-Poor: It’s Not About Data Quantity but How You Use It
We’re approaching an entirely new digital divide. While we’re all aware of the divide between the rich and poor,...
Read More

From Data to Personalized Experiences: The Process of Audience Activation
Audience targeting is a rigorous process. First, you need in-depth analytics and a personalized end-to-end customer...
Read More